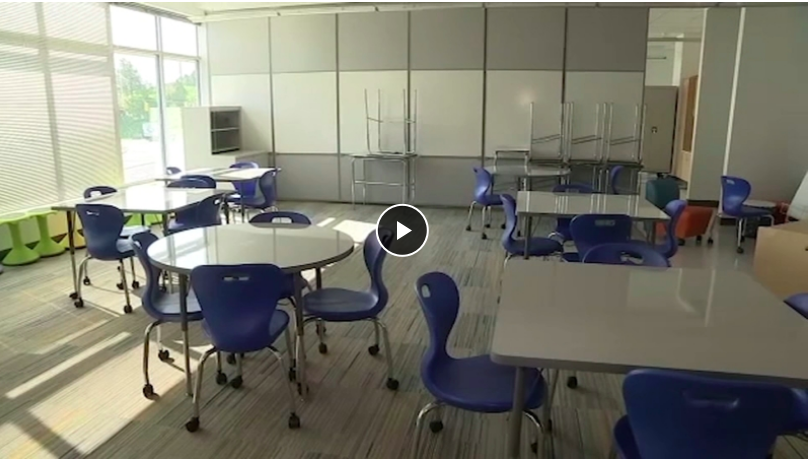 Eight new schools are opening in Wake County this school year — but none like this one. It’s not just a school, it’s a YMCA. Plus, affordable housing. And, eventually grocery store, even a bank. It’s all happening on 32 acres of land in an area of the city where it’s needed the most: The Rock Quarry Road corridor near I-40. When you see the pool and the splash pad outside, it’s a dead giveaway that this is not your average Wake County elementary school.

“Our community has not seen anything like this before,” said Kia Baker, the director of the non-profit Southeast Raleigh Promise, whose mission is to revitalize southeast Raleigh through what’s called a purpose-built community model.

So when talks began in 2012 to build a new YMCA in southeast Raleigh — in this part of town with some of the highest levels of poverty and lowest levels of education — they soon realized, they needed more than just a new “Y”. “And so that vision started getting bigger, with lots of community volunteers and folks engaging in the conversation,” Baker said

The Vision
It’s a big plan. The school and YMCA opens this month. But a hundred feet away, new affordable housing is under construction — brand new apartments set to open next summer. Next to that, a new shopping center is planned — with a much-needed grocery store and a bank to serve residents’ economic needs.

A Unique Project
Wake County Public School System, the largest district in the state, has never been involved with before with a project like this. It’s the district’s first foray into community re-development.

“Ambitious … bold,” said SE Raleigh School Board Rep. Keith Sutton about his first thoughts about the plan. “But you know this is a can-do community. It was a lot of work because it was a different type of collaboration, a different type of partnership, and a different way of thinking. So, it was a paradigm shift for a lot of us.”

Not Your Average School
Shared spaces like the community kitchen isn’t just for students — the Y will open it up for neighborhood use; Think: healthy cooking demonstrations. The rooftop garden is just big enough for students to use for their science classes.

The pool, of course, is a shared space. But each student who goes here is required to take swimming — a way to combat the issue of lack of access to swimming lessons in marginalized communities. And while Southeast Raleigh Promise is keeping its focus on this part of the city – there’s hope what it helped build here can be replicated in towns and cities across the Triangle. “Certainly we hope we can be a model,” Baker said. “And help other folks learn how to do this work.” Read more here.