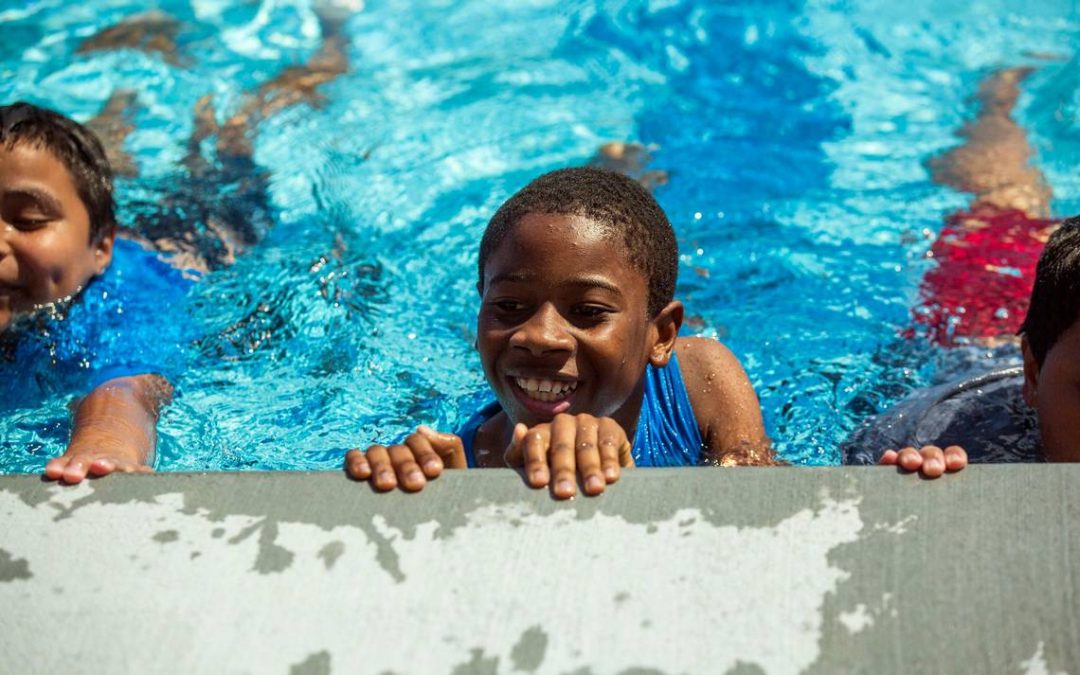 The Wake County school system has 191 schools, but the only school with a swimming pool is not in affluent western Cary but in Southeast Raleigh. Southeast Raleigh Elementary School opened Aug. 26 with features not found in typical Wake elementary schools, such as an outdoor swimming pool. The school has such amenities because it’s part of a joint community project charged with helping to revitalize one of Wake County’s most economically depressed areas.

The swimming pool is one of the ways that the school is making learning a positive experience for the 457 students who come each day, according to Cheryl Fenner, the school’s principal.

“Our role is to work with the school and the community to really find ways that we can make a difference together and to continue to address inequities together,” said Dexter Hebert, executive director of the new Southeast Raleigh YMCA.

The new school is an important part of the project to help address how the area has lower academic performance than the rest of the district. It was a dream job for Fenner, who grew up in the Southgate neighborhood near the school.

“I have a chance to work collaboratively to give back to the community that helped to raise me and helped to nurture me and was committed to making me successful,” Fenner said. “It’s an honor and a blessing for me.”

As part of the joint effort, the YMCA provides instructors for the free swimming lessons that are provided as part of the school’s gym classes. Students who were initially reluctant to get into the water are now clamoring for a chance to learn more. (The pool technically belongs to the YMCA.)

“When they’re swimming, they get to be kids,” said Dave Jones, the school’s physical education teacher. “It’s the happiest I see them all week. It’s what they all look forward to doing.”

Other unique features include:

▪ Club ROAR (Reaching Our Awesome Results) afterschool program run by the school and the YMCA that provides a mix of different activities for students.

▪ A community kitchen that will teach students, parents and the community how to eat healthy. Southeast Raleigh Promise, the group coordinating the project, paid for an “edible education staff member” to show students how to use food grown in the school’s gardens.

▪ Four pre-K classrooms, more than any other Wake elementary school, to help local children get prepared for school earlier.

▪ Extra support staff such as a full-time school nurse, two school counselors and a full-time social worker to help meet social and emotional needs of students and their families.

▪ A school library filled with books that feature people of color to mirror the demographics of the largely African American and Hispanic student population.

“There’s such a history and so many of our students’ families have lived in Southeast Raleigh for generations so telling that story of that rich heritage and culture is important,” Tuttell said.

The unique nature of the school meant Fenner had no problem recruiting teachers, including minority educators. Some studies have shown that minority students do better when they’re taught by minority teachers.

“It’s nice to have highly qualified staff where many of them might look like the students that we serve because oftentimes that is an automatic connection,” Fenner said. “We’re about building solid, respectful, positive relationships with our students.”

After having grown up in low-income housing with a single mother in Florida, kindergarten teacher Shilo DeShield said it became her passion to work at the school.

“I came from an area that these students are coming from and their story was my story,” DeShield said. “I just really wanted to be a part of making a change for this community and giving back the way someone gave back to me when I was younger.”

DeShield said working at the school has already proven to be a positive experience.

“They’re just excited about coming to school,” DeShield said. “Every day I do a goodbye song with my kids and every day they say, ‘We don’t want to go home. We love coming to school.’”

Fenner said she realizes that change won’t happen overnight. But she’s confident it will come as the community pulls together to improve Southeast Raleigh.

“We’re moving along together and we are getting input from the community through our different partners of what the needs are,” Fenner said. “Then over time we’re going to break those needs. It’s our job to try to eliminate barriers.”