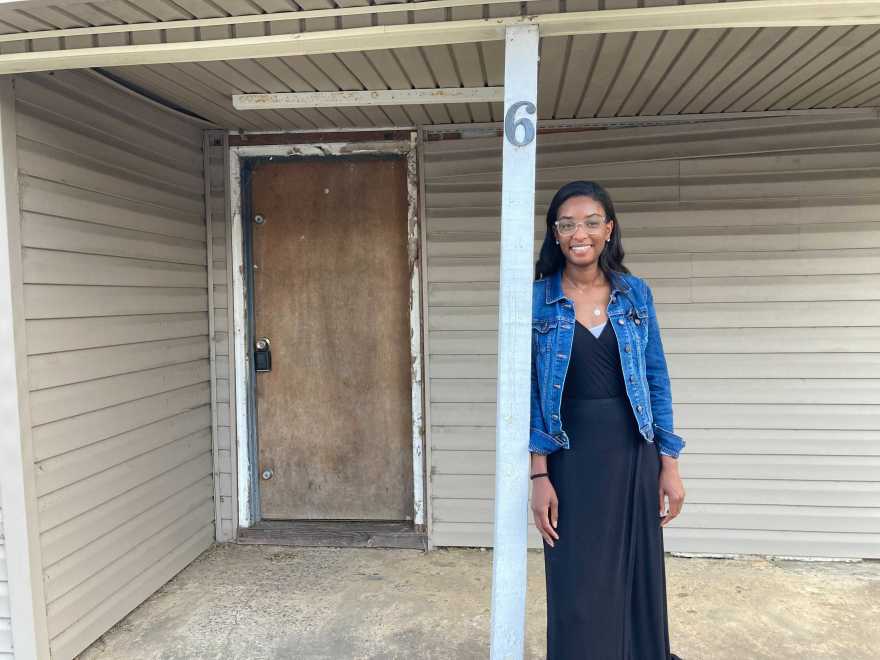 At the corner of Fayetteville Street and Levister Court in Southeast Raleigh sits a modest single-story building with beige aluminum siding that has been in Jessica Peacock’s family for decades. Back in the 1960s, her great grandfather acquired the property and turned the single-family home into a retail space for the neighborhood. Peacox Community Market was a neighborhood store where folks could pick up a drink, a snack, and catch up on community news.

“Most of my memories are just like coming through this door, seeing folks sitting outside on this porch, and walking in [and] getting my free piece of candy,” Peacock says with a laugh.

Peacock wants to renovate and revive the store. She’s working with her father and uncle to make it happen with the goal to re-open by spring of 2023. But there’s still a big hurdle in the way — the current zoning laws in Raleigh don’t allow for corner stores, like the one Peacock plans, in residential areas. A new proposal in front of the city council aims to re-evaluate the wording of the laws to open the doors for more corner stores across the city.

For Peacock, it’s not just about opening a convenience store. She sees the business as a way to cut through food insecurity and to rekindle a traditional Black-owned business.

“This is a single-family home, which I think is super important and speaks to how a lot of the Black businesses started,” says Peacock. “We didn’t start with brick and mortar. Folks were doing things out of their home, whether it was doing hair inside of your home, or providing groceries, or retail, or convenience store. [Which] I think adds a very — almost deeper — community sense to the way you serve a community.”

Over the years, Peacock’s family leased the location out to other Black-owned businesses. But the leasing stopped about ten years ago, and the shop closed its doors. Now Peacock is working to bring fresh life into the corner and her community. She says others in the neighborhood also want the store to come back.

“Sometimes people will stop and ask like, ‘I hope y’all opening back up. We missed y’all,’” says Peacock as she tours the shuttered space on a recent fall evening.

She wants the store to serve many of its original purposes, but also to meet other needs. She sees it as a chance to provide fresh, affordable food, educate residents on the benefits of eating healthy, and revitalize the rich culture in the city’s Walnut Terrace community.

“I’m very strategic about not calling Peacox a corner store. Because when you use corner store in Southeast Raleigh [it] has a different connotation than when you use it off Six Forks or in North Hills. So I’m making sure that we’re calling them neighborhood markets because these folks live in neighborhoods — whether we got HOAs or not — these are neighborhoods, and these are communities,” she says.

A push to change the rules

Under current City of Raleigh bylines, Peacox cannot re-open as a store in the building’s residential mixed-use neighborhood.

“So we’re located in an RX-3. You can’t be retail in RX-3 if you’re at the corner of two main streets and on the first floor of an apartment building. And so obviously we don’t meet that criteria,” says Peacock about the single-story building.

Jonathan Melton, a Raleigh city council member, has been spearheading the effort to change zoning laws to allow for businesses like Peacox Community Market.

Melton says breaking up a city into sectors has contributed to car dependency and the creation of food deserts. He looks to the urban planning concept of the 15-minute-city, where residents can access essentials within 15 minutes either on foot or by bike, as inspiration for designing a healthier community structure.

The zoning law proposal will have to go through a series of votes before it can be implemented, but Melton is confident because he’s seen success in other parts of Raleigh.

“If you go to some of our oldest, most historic neighborhoods like Oakwood or Boylan Heights, there are still corner stores there because they predate the changes in zoning code. They’ve survived for decades because they’re supported by the community. And these are beloved places,” he says.

“And then you saw this shift to, I would say, very restrictive zoning exclusionary zoning, that in hindsight, now folks acknowledge was at least implicitly racist, if not overtly racist,” says Melton. “I think we have to acknowledge the harmful history of where some of these laws came from and try to do better in the future.”

The USDA estimates that more than 30% of Southeast Raleigh residents live more than a mile from a supermarket. Urban areas like this are commonly called food deserts and they don’t pop up on their own. Instead, they’re often a product of policies — like zoning laws — that affect low-income communities.

Despite the hurdles in place, the community is working together to jump over them. A few weeks ago, on a sunny Saturday morning in September, contributors to Southeast Raleigh Promise (SERP), tended a community garden at a local YMCA. The nonprofit is working to revitalize the community through education, affordable housing, and health. Part of that includes supporting this community plot in an area that otherwise deals with a lack of sustainable fresh food options.

Moani Wade has been coming out to work with SERP since last June. As she pours soil into the flower beds, she says the garden helps meet a number of needs.

“I know that it helps families and stuff, and I know the garden helps my family a lot because I take food home to them too. In these past couple of months, I used to bring them home a whole bunch of like cucumbers, squash and stuff like that. And they would actually like, eat it. I didn’t think they were gonna eat it, but they actually ate it. And it was really good,” says Wade.

She lives within easy access of fast food options, but reaching a grocery store is more challenging. Her brother is a fan of fast food, she says, and she’s been making a push to encourage him to eat healthier. Wade believes a nearby corner store like Peacox Community Market would help shift the community’s eating habits.

“I feel like if we have corner stores, and places that we can get fresh food that is close [it] would change a lot of stuff that goes on in our community. Like a lot of health problems in our community: obesity, diabetes, heart problems, kidney problems, she says. “That would definitely help.”

Beyond the garden, the Southeast Raleigh community has also implemented fresh food shuttles, a black farmers market, and other small community gardens like the one run by SERP. As Jessica Peacock continues her work toward a local market embedded in the neighborhood, the broader Southeast Raleigh isn’t waiting for change.