Amazing students’ at Enloe High School raise $207,000. See who the money will help. 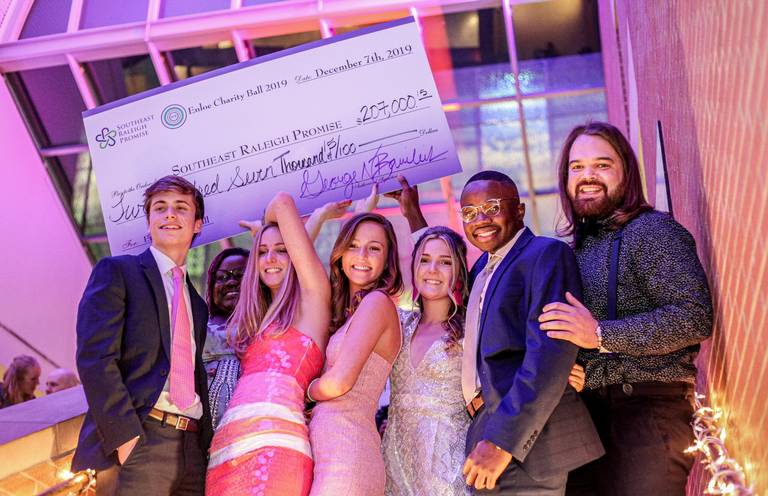 Praises are pouring in for Enloe High School students who raised more than $200,000 this year to help a non-profit group trying to break the cycle of inter-generational poverty in Southeast Raleigh.

At Saturday night’s 2019 Enloe Charity Ball at Marbles Kids Museum in Raleigh, Enloe’s student council presented a $207,000 check to Southeast Raleigh Promise. The money will go toward programs such as providing financial support to Southeast Raleigh Elementary School and the families who attend.

The Charity Ball has raised more than $1 million over the past 15 years, resulting in strong competition from local charities to work with the students. They topped last year’s previous record of $205,000 raised to support the Autism Society of North Carolina.

The Charity Ball committee picked Southeast Raleigh Promise out of a field of 46 applicants because the group works with students who go to Enloe, a magnet school on Clarendon Crescent in East Raleigh.

Much of Southeast Raleigh Promise’s efforts in the past four years has been spent building the Beacon Site, the former Watson’s Flea Market that was purchased by the YMCA of the Triangle. Phase one has been the recently opened Southeast Raleigh YMCA and Southeast Raleigh Elementary. Future plans call for 120 apartment homes and a variety of services such as a grocery store, bank, coffee shop and medical facility.

Students set the goal of raising $200,000 for Southeast Raleigh Promise. The fundraising efforts went down to the wire, according to Nate Barilich, director of the Enloe Charity Ball and an English teacher at the school.

Carter Wood, 18, a senior, said he’ll never forget the moment when the check was presented to Kia Baker, executive director of Southeast Raleigh Promise. Organizers threw in an extra 15 cents, making it $207,000.15, in honor of the ball’s 15th year.

“It was just incredible,” said Wood, vice president of publicity for the charity ball. “The crowd went wild with excitement. Kia was crying, Some of us were crying.” Read More here.