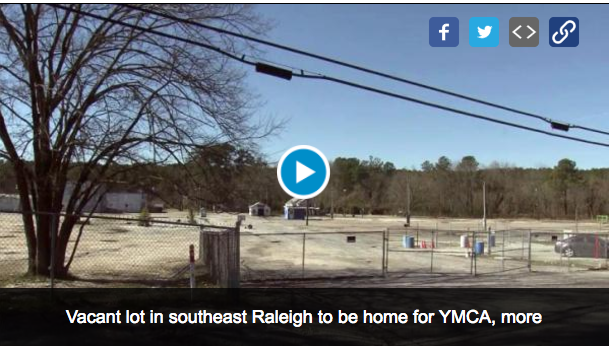 The nonprofit spent $4.7 million in November to buy 32 acres on Rock Quarry Road, near Interstate 40, for the new Y, and plans call for putting an elementary school, a grocery store, a health clinic and 75 to 100 affordable housing units on the site as well.

Regional Vice President Jon Mills said the Y has been studying the expansion for several years, including holding numerous discussions with the community.

“I think it gives a community the opportunity to come together, to exercise, have a meeting place,” said Dexter Hebert, associate executive director for southeast Raleigh at the Alexander Family YMCA on Hillsborough Street. “It gives me chill bumps just to think about the potential.”

Kendrick Ruffin grew up in southeast Raleigh and now goes to the Alexander Family Y to exercise and connect with people.

“It’s an amazing experience, as far as all the opportunities here and the staff, how they treat you and how you can have this environment,” Ruffin said.

The residents of southeast Raleigh would benefit from such connections, he said.

“If this same opportunity was over there, a lot of people would enjoy it too,” he said. “There’s a lot of children who just love playing basketball and love being active, but they don’t have the same opportunities as different parts of Raleigh do.”

Kia Baker, director of the Southeast Raleigh Promise Project, said the proposed YMCA complex would go far beyond the benefits of having a local recreation center. It would give families the chance to break a cycle of poverty through education and job training, she said.

“Southeast Raleigh is a diverse community – rich in culture, rich in heritage – and there is no deficit in the assets that are here in our community,” Baker said. “This too can be a very vibrant part of our city.”

YMCA officials are working to raise the $15 million needed for the project and hope to have the new branch open by late 2018.