Kia Baker, our Tar Heel of the Month, is a beacon for revitalizing Southeast Raleigh 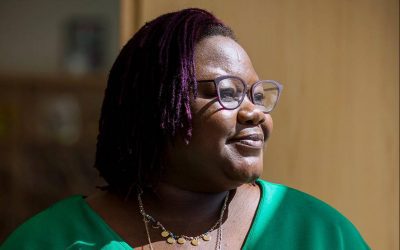 Kia Baker was a college senior when she shared with her friends her dream of creating a village in Southeast Raleigh where people would have convenient access to all the services that they’d need.

Fourteen years later, Baker’s one-stop village is coming to life off Rock Quarry Road, where a new joint elementary school and YMCA opened this summer and affordable housing and commercial space are also planned on the 32-acre parcel. Baker and other community leaders are hoping the “Beacon Site” not only will improve the lives of the residents who will live there, but also serve as an inspiration for the rest of Southeast Raleigh.

“It’s going to be a happy and thriving place for people who live there, work there and play there,” Baker, 36, executive director of the nonprofit Southeast Raleigh Promise, said in an interview. “But it’s also a symbol that collectively we can do things differently and will do things differently.

“It’s a beautiful investment in a way that our community has not been invested in before.”

Baker is charged with coordinating the groups involved in the project. Those who have worked with Baker say it’s a job the Southeast Raleigh native was destined to fulfill.

“Kia is more than a rock star,” said Verna Best, social and economic vitality program manager for Wake County Human Services. “Kia is more than a superstar, because at the core of her being, she is genuine in making positive change in the lives of young people and adults in Southeast Raleigh.”

For helping bring a major vision to reality, one that could have an impact on future generations of Raleigh residents, Baker is The News & Observer’s September Tar Heel of the Month, which honors people who have made significant contributions to North Carolina and the region. She will be considered later this year for Tar Heel of the Year, the N&O’s annual honor named in December.

GROWING UP IN SOUTHEAST RALEIGH

Baker grew up near Biltmore Hills and later Roberts Park in Raleigh. She attended Hunter Elementary School and Ligon Middle School before going to Athens Drive High School, where her mother, Hoyie, was an English teacher. Her father, Lattie, was a longtime assistant secretary in the N.C. Department of Corrections.

Her rides to school were punctuated with the song “Hakuna Matata” from “The Lion King” playing in the car to pump her up for classes.

Baker went to Hampton University, a historically black college and university, in Virginia before returning to N.C. State to be near her family. Her original plan was to get a master’s degree so she could become a literary critic.

To help support herself during grad school, Baker worked at the Brownstone Hotel on Hillsborough Street, which in the mid-2000s had far more homeless people than today. Her observations of her surrounding on her walks from work to class prompted Baker to change her career plans.

“I looked around at all the different things going in in our community,” Baker said. “I felt like I can sit in the ivory tower and observe and write, which has a lot of value, or I can figure out how to dig in and really try to think about the problems that are all around and what I can do about it.”

At the encouragement of her brother and sister-in-law, Baker joined the Public Allies program, which trains young people to be community leaders. She credits the program with shaping her views on social justice and leadership.

Over the next nine years, Baker worked with different community groups, including Habitat for Humanity, Public Allies and the Interfaith Food Shuttle.

While Baker was developing her skills, other groups were talking about how they could do more to help Southeast Raleigh, an area which has historically been economically depressed compared to the rest of the county.

They turned to the Purpose Built Community model, which involves bringing together different groups to focus resources on low-income neighborhoods.

“We know that if we do end the intergenerational cycle of poverty it’s going to take getting a fresh new set of eyes on it,” said Damon Circosta, executive director and vice president of the AJ Fletcher Foundation, one of the groups involved in the project.

In 2015, Baker was approached to lead a new community group called Southeast Raleigh Promise. Circosta, who served on the hiring committee, said they wanted someone who would be “leading from the trenches.”

Baker, who was coming off maternity leave at the time, admits she was initially a little scared of the new responsibility. But she recalled the dream she had shared with her friends about what she wanted to do after college.

“For this opportunity to present itself in my life, it was nothing short of divine,” Baker said.

Yvette Holmes, a member of the board of Southeast Raleigh Promise, said it has been essential having a person with Baker’s background leading the organization.

“She brings a level of understanding of the community,” said Holmes, vice president of resource development & partnerships for DHIC, which will build the homes at the Beacon Site. “She can advocate for the community and lobby on behalf of that community.”

Much of the past four years has been spent building the Beacon Site, the former Watson’s Flea Market that was purchased by the YMCA of the Triangle for the project. Phase one has been the recently opened Southeast Raleigh YMCA and Southeast Raleigh Elementary. Future plans call for 120 apartment homes and a variety of services such as a grocery store, bank, coffee shop and medical facility.

Circosta said Baker has repeatedly shown her talent of encouraging people to work together, such as the Wake County school system, YMCA, DHIC and Wake County government. For instance, Circosta said Baker persuaded school officials who were worried about liability issues of students using the outdoor swimming pool.

“She finds ways to get people from ‘I don’t think so’ to ‘let’s see what we can do,’” Circosta said.

It’s never been a given that the project would succeed, Circosta said. It’s been precarious at times, he said, but Baker has kept things together with her personal charm and ability to get the different groups to agree.

“When you meet Kia for the first time, you know she comes in having done her homework,” Circosta said. “She’s prepared. She’s got this unique way to engage a broad variety of personalities.”

Baker said she’s seen her role as helping to fill the gaps, such as coming up with money to help families who were unable to afford the new school uniforms.

RESHAPING THE FUTURE OF SOUTHEAST RALEIGH

Despite how proud she is of what’s happened so far, Baker said she realizes that the 120 apartments are only a “drop in the bucket,” considering how many people live in Southeast Raleigh. She said there is plenty more work to do, such as developing ties to have a larger voice in impacting the area’s future.

“We know that we’re not going to be in control of every single thing in the Rock Quarry Road area,” Baker said. “But we do want to be in partnership with the people who are doing work in the area so we can ensure that positive change for the residents of our community.”

Baker said one of the most important things that they will do in the long-term is training people in the community to become advocates and activists. For instance, she said they want to address how people of color are under-represented in local government.

“Brick and mortar is important,” she said. “But most importantly is preparing our people to do the work of moving change forward.”

One of the areas that Baker hopes to address is the lack of affordable housing in Raleigh. Baker can relate because she kept getting outbid for new houses when she was looking to buy in Southeast Raleigh.

Baker wound up buying a home just across the city limits in Knightdale. She was quoted in a May New York Times article on gentrification in Raleigh.

“Affordable housing is not a problem just for poor people or for people of color,” Baker tells The N&O. “It’s a problem for all of us. If we don’t do something, we’re all going to look up one day and wonder where in the world are we going to live.”

Breaking the cycle of intergenerational poverty in Southeast Raleigh is a lofty goal. But Baker’s colleagues say they expect she will make a positive difference in the city’s future.

“It’s not about the accolades or the number of awards for her,” Holmes said. “I do believe that she has a sincere desire to bring about change. As along as she has that desire and her motives are pure — which I believe they are — she’s committed for the long haul.

“Having someone like that who has proper motivation is going to serve the community’s interests well.”